Every winter my family, and those within ear shot, are subjected to my cry of "let it snow!!" As I have mentioned, I don't want to shovel or drive in it, just enough to play!

Last year around this time, my sweetie decided to give me the best birthday present imaginable.

Friday evening, he told me I needed to pack an overnight bag, that on Saturday, when I finished at work, he would pick me up. Exciting! He would not tell me more than that. Saturday came, I finished my day and off we set on this surprise journey.

After picking me up, he did tell me where we were going, he was taking me to snow!

The forecast showed a possibility of snow as far south as middle Georgia. He had checked out several places and had decided not to take a chance on Georgia snow and chosen a B&B in Highlands N.C.

About 90 miles out of town we came across the first signs of snow. Then there was more and more! 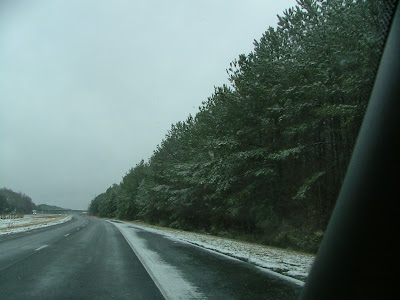 We exited the interestate to snap the first shot of our snow-venture. 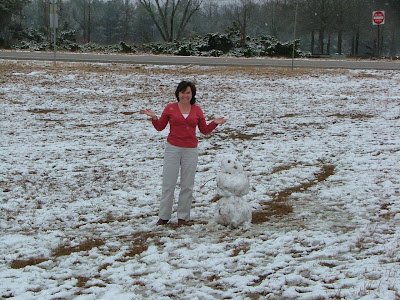 North of Atlanta, almost to the state line, guess what? The S.N.O.W. was. gone! Poor Will was a little disappointed but we were looking forward to a night away.

As we approached the Georgia line the sun was setting. We crossed over into N.C. and started up the "mountain" in the dark. After a few miles I started to notice something. Through the dark, under the trees - white stuff. More snow! Yes!

We wound our way in the dark up the road. More snow. Some Ice. It was beautiful!

We arrived at the bed and breakfast, crunched through the snow to the warmth of the inn through sites straight out of Christmas song. 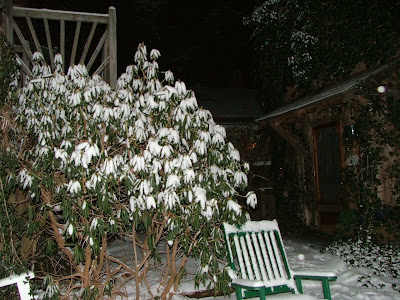 The next morning we were out early taking in the area and the snow!


And yes! Snow Angels are a must! 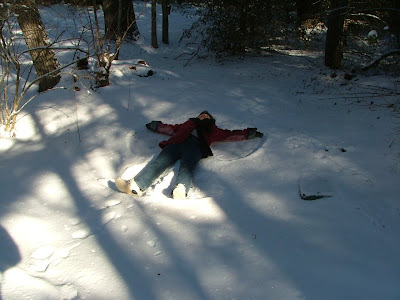 There was a park down the road from the B&B that we heard had a beautiful view. It was iced over, so no driving up the half mile road to the view. So we hoofed it, out of shape, but we made it. A half mile, up a steep incline, out of shape and on ice? Yes, even a meesly half mile whooped me (a flatlander). I have not fallen on ice in years, but what a trip back to a time long since passed. 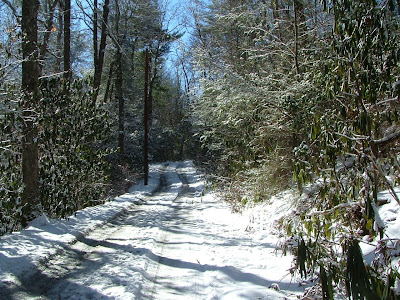 The view was spectacular, the wind chill biting, the birthday gift - the best. 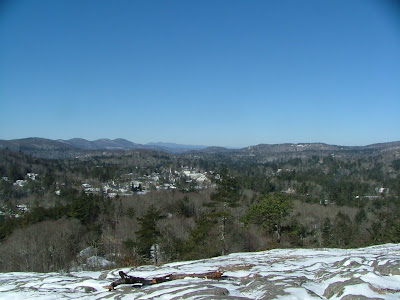 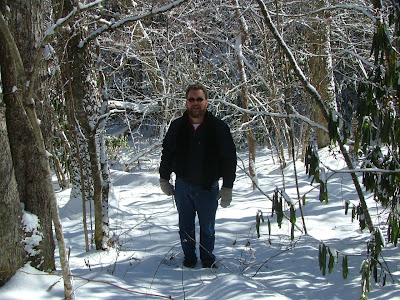 The man with the plan!
Sled on over to Carries for more photo phun!!
Pin It

I am with you... just enough snow to play in. Alas... here I am in Connecticut and we have snow all the time. The first snowfall is beautiful and by March I am so crazed for spring. I can't wait to wear shorts or summer clothes and will take them all out only to have to find my sweaters again after one false start after another.

OMG - that's what I wanted when we went on our honeymoon to N. Carolina! We did get to see a bunch of snow flurries at night time and that was exciting. But WOW - to your pictures. And how absolutely sweet of him to surprise you and take you to snow. Loved the pictures!

That is wonderful!! I love that part of NC, it's always beautiful especially in the snow.
Girl you are one lucky woman! Big Daddy would never even begin to plan a trip for us, LOL!!

Wow! Your guy is a sweetie! What a great present!

So glad it worked out for you. It was a really wonderful thought, taking you there.

How fun! That is so cool that you were able to do that. what a nice hubby to make your wish of all wishes come true.

I too love the snow. I don't think I could live up north where it is a normal occurance and people deal with levels of "feet" deep al lthe time. But I do love to watch it fall from the sky, cover the ground all around with a blanket, and make everything sparkle. It is such a cleansing beauty.
God is such a cool creator!

Blessings to you and your family today.

BTW, I am so curious....
You so wonderfully sent me an email answering my previous questions. I couldn't help but notice your email address of "Lailani". Are you originally from Hawaii?

Fun! Thanks for visiting my blog!

and pick upa "Georgia Friends Award" for your blog!

yea! snow! we so want snow every year that we come home to the USA for Christmas...and guess what happens?
it seems like it comes after we leave :(
this year the kids had a little...enough to make a small snowball...
maybe a trip to colorado would work?! meet you there?
:) BG

Hi,
I am in Middle Georgia and I know what you mean. We hardly ever see snow, except!!! we have a chance tonight; YaHoo.

On the asparagus. It is so easy to grow. Just plant the roots,(about 6 inches deep) add a lot of compost and good soil. Wait..2nd year you can eat a good bit, 3rd year..go for it.
I know that a lady that lives near Jekyll Island grows it there.
There is just no comparing the fresh grown to bought asparagus.
It taste so good.
I hope you decide to try it.
Thanks for the visit.
Pam