Today is a big day, so I am going to piece mill this post . . . in fact I am going to repost a post and mix some new with it. I like to mix things up once in awhile.

See, forty years ago today, Nixon was being inaugurated. Thirty-Two years ago, Jimmy Carter was being sworn in to the Presidency. 1981, we welcomed Ronald Reagan to lead this nation. The list, of course, goes on from there and had gone on before the mentioning of these leaders.

The day started out wonderful. My grandmother was visiting from Nebraska (we lived in Colorado at the time, but did not get to see her very often). My mom had made my all time favorite breakfast – French toast. Now, I tended to like my French toast rather simple, butter was all I needed on top! But this being a special day, you know, my birthday and my grandmother was there. She talked me into venturing out a bit, and convinced me to try something new, maple syrup on my French toast! It was different, not necessarily bad, just new (hang with me, this is relevant).

So I gobble down my breakfast and then I was off to school.

A few hours later, I became sick. Sick to my stomach sick. My mom was called; I was picked and went home, thinking and believing, the maple syrup made me sick! And sad to say, I still, to this day, do not add maple syrup to my French toast, pancakes, nada! Nope, not going to happen . . .

But this is where the gathering begins . . .

We turned on the TV. 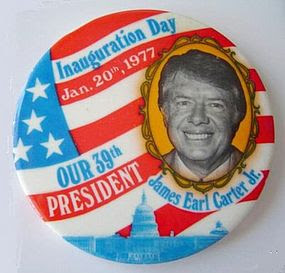 The countries 39th President – Jimmy Carter – be sworn in.

As I said, crowds were gathered, speeches were given, people cheered, and probably, some people shed some tears.

Four years later, we had moved to Georgia. On my birthday, I again, got out of school early. This time, not because I was sick, but to experience history taking place . . .

to see Jimmy Carter return to his hometown.

Well, and to hopefully see a cousin that was a pilot with the Air Force One Crew.
~ ~ ~ ~

I have recently found some really bad pictures from that day in 1981 . . . 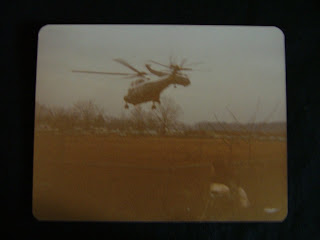 It was rainy and cold, and as said above, I had been taken out of school early and we headed to Jimmy Carters hometown to see his return. We went to the feild where the helicopters were landing. My mom and brother are in the picture. We were hoping to see my cousin, who was one of the pilots during Carter's presidency. We did not - he stayed in Macon. 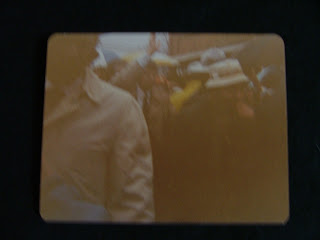 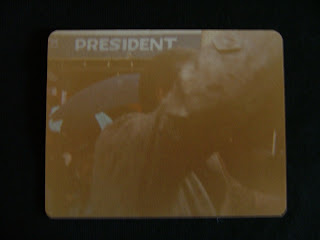 Aren't you glad there is a sign behind him to tell you he is president, umm, was?
We had managed to get to the front of the crowd, with just a rope separating us from the official party. I had had a great shot right before this one, but being 10, I was short. Being short meant that the lady behind me could easily bring her welcome home poster down in front of me right as there was a chance to get a picture of more than his arm!
So now here we are today. Another inauguration, and yes, for me another birthday. I did not get to ramble out to Texas to welcome President Bush home, instead, I will work and enjoy my family this evening. And even take in Deomolition D's B-Ball game.
But as I look back, I realize, even though my parents did not vote for Jimmy Carter, we took in the excitement of the hope as change in our country was taking place. And I believe the same is true today. Great hope and heartfelt prayers for guidance for our great Nation. . . for all of our leaders.
And prayer for grace as I pass this milestone, the big 40 and may it be as fun as I have heard some say (If you know otherwise, you don't have to share - let me find out for myself - hehe).
Pin It

Happy Birthday!!! 40 is a good age to be. The "4's" were fun for me. I believe age is a state of mind, choice in an attitude. I think watching the game is a good idea,,Have fun!

Happy Happy 40th Birthday! 40 is great. It just keeps getting better from here.

Happy Birthday! I've added your link to my blog - this is such an interesting post! Excellent. I vaguely remember being 40. It was a long time ago...yipes....But yes, the years are good - enjoy your Inauguration birthday! (I think it was just having to go to school on your birthday that made you sick.)

petra michelle; Whose role is it anyway? said...

I am so sorry I missed this on "the" day! Happy belated. And what a great birthday story to be able to share. Blessings on you this year; may God grant you the desires of your heart.