Does Vacation and Nightmare Go Hand In Hand?

Rhonda is having a contest!
The invitation is to share your Vacation Nightmares. . .
Got a good one to share? Travel here, and join in!

Several months after Will and I married, it was decided to plan a “blended” family vacation. Now, we had been on vacations before, Will’s mom has a home a couple blocks from the beach on the Gulf. But this trip was to be a road trip. A trip longer than the three and half hour trek to the beach.

Options were narrowed down to Disney, the Grand Canyon, Washington D.C. Disney and the age difference in the kids seemed like a stretch at the time which left us with the Grand Canyon and D.C. Well, hubbies adventurous side was the Grand Canyon and possibly camping our way there. I did not come out and give my emphatic no, just kind of delicately expressed my concerns. In my mind, I could imagine the 6 of us in the mini van traipsing cross country cooped up in that van and sleeping on the ground each night. In my mind the image of arriving at the Grand Canyon, getting out and having one or more of the kids look and say “Ok, that is big, can we go, what is next ?” produced, in my mind, a not so wonderful feeling and the image of someone being swallowed by the canyon! So we steered our way to Washington D.C.

Planning and saving began. The kids were excited. I had my notebook of options. Places to visit, restaurants to eat and where to stay.

Plans were made to leave on a Saturday morning – 6:30 a.m. Kids were given the time. Ocho and Traveler were at their mom’s house that week, but were coming on Friday night before we were to leave. Times were set, so all could be loaded into the van and we could know everything was set.

#1 Ocho and Traveler did not get to our house until 10:00p.m. Friday night. That is several hours later than we had expected. They arrived only to leave again because they needed something from the store. They left and did not get back until after 11:00. So much for having everything packed and ironed out and all of rested for the early morning. 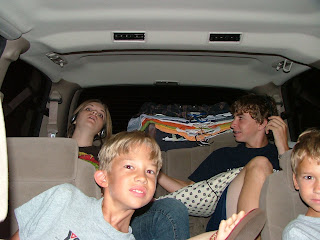 #2: About an hour and half into the trip, the next morning, from the back seat, a voice carries through the van “when can we stop at a laundry mat?” Traveler’s only clean clothes were the ones she was currently wearing. All that was packed was dirty. I will not elaborate any more on this. Gotta give her her dignity.

#5: A claiming of the back seat and the mad dash by four kids every time there was a stop

#6: Trying to find a restaurant for every meal that would appeal to a vegetarian. Said
vegetarian not delighted if a stop did not have as many meat free choices as the 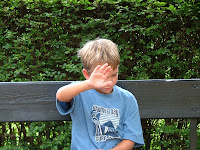 #7: Naivety on the planners part – you really don’t have to walk everywhere in DC. There is a metro that runs all over the place. Too bad we did not notice the signs to the stations before the next to the last day 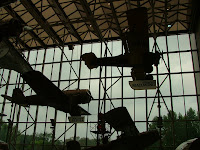 ng in trouble twice: The Smithsonian Air Museum. Never take a picture BEFORE going thru security (there were no signs posted and the airplane hanging above was cool); And the National Archives. They stress “NO LIGHTS, NO FLASHES.” Note: new digital camera has a green light that comes on whether or not you use the flash. Security guy was stern but did not take my camera. I had no idea there was a green light until after that.

After all that many other little issues . . .

We are up for the last day in DC. The van is packed and after DC we are headed to Kitty Hawk. First stop: the Lincoln Memorial. But we missed the turn so we ended up at our second stop first: Arlington Cemetery. 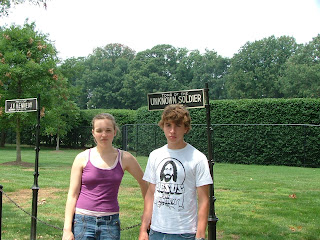 We attended the changing of the guard. Amazing! As soon as it finishes, Traveler comes straight up to her dad, showing signs of teenage indifference and says “can we go now?” So much for the solemn moment that had just finished. As she and Ocho head back to the welcome center, Demolition begins a tirade of why does he have to go with us. We change our plans of seeing Grant’s home and head on to the kids. It is decided to walk across to the Lincoln Memorial. By now it is lunch time. We are all hungry. We arrive to the Lincoln Memorial and all, but Will, plop down against a column and rest. Tired. Hot. Hungry. We notice the sky is getting darker and dark clouds are coming from the Arlington side. 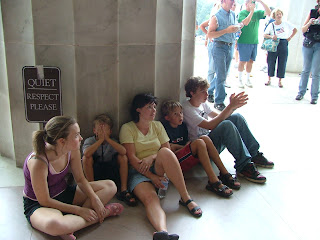 I refused to walk back. We were all tired, we would just have to get a taxi. So we all crowded into a taxi and headed back to Arlington’s parking lot. We piled out of the car and off the kids dashed to the van in their hurry to claim the back seat.

Demolition D and The Man arrived first proudly claiming their spot to get in first. The doors were unlocked, and in their quest to get the back seat, the older kids knocked and smooshed the younger ones out of the way. Oh did the tears fall and the crying and anger surface.

Will being the patient soul he is, gently coaxed Demolition D from the van, telling the older ones to move, and talked with him away from the van. D decided he was fine, but he was not, and rudely pushed past Will telling him “don’t worry about it” and marched to the van, jumped in and began to close the door in Will’s face.

Well the patient soul let loose to tired, hungry, frustrated Will! As that door was being shut in his face, in the middle of his sentence, he grabbed the handle, yanked it open and . . .

The door came off the track in his hand!

Everyone’s eyes were as big of saucers. The older ones still had not left the van as they had been told, they left then. The Man left. The kids huddled around the columns of the parking deck – the parking deck that we were not parked under, but out from.

I walked around the van to see the door hung by one bolt, hubby holding it up, somewhat dumbfounded.

One overhead clap of thunder and the bottom fell out! So there stood Will, in the rain, holding onto the van door as I scrambled for an umbrella. God smiled on the situation. A very kind fella named Hank, from Cincinnati, and his wife, were in their car, under the parking deck, and came to the rescue. The other wife and I stood holding umbrellas over our fellas as they managed to get the door back on track. They never said how much of the family clash they witnessed, that we will never know, but we are thankful for their compassion.

The kids quietly entered the van, the older kids in the middle, not the back, and we were back on the road.

About thirty minutes down the road, on our way to Kitty Hawk, Will and I started giggling and then laughing. All the ire had subsided and all seemed pretty silly. Traveler of course, did not appreciate our sense of humor in it, yet, but the story has provided much entertainment for others. And all of us laugh about it now, even Traveler! There were a few more happenings on the time left on the trip, but all and all, nothing could surpass the parking lot at Arlington Cemetery. 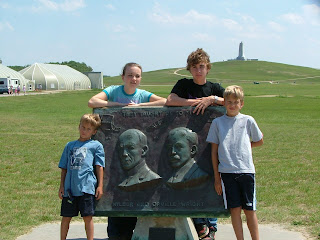 The Faces Say It All

All trips since have been to the beach!
Pin It

Labels: Colliding In The Blender, life

Good luck to you Imerie. Hope you win and get to meet the famous Rhonda. She will not make your time a dull one. That is for sure.

You are brave to travel with the number and ages of your kids! We have 2 (18 and 5)and that's a challenge. I can't image adding more!!

My two Ds are difficult at times, but hats off to you!

Hahahahaha! Oh, that is so, so funny! Thank you for sharing it!

petra michelle; Whose role is it anyway? said...

"All trips since have been to the beach!" What an hilarious anecdote, Imerie!

I'm so bad. I just discovered you on my followers' list. Thank you, Imerie! I remember visiting while on one of Muse's adventures.
I just about have time to keep up with blogging, let alone the doodads that go with it! Will see you on the Orient Express! :))

I've been to DC a lot of times, because I have a cousin who lives in Maryland. It might have been a nightmare looking back, but there are some really good pictures and fun memories now.

Imerie, LOL! Sometimes you just have to laugh at the insanity of a situation, and you guys were definitely in one of those crazy situations! :-) Glad you all survived.

Wow! Sounds like an interesting trip! Glad you all survived and can now laugh about it!

There's a reason some animals eat their young!

Amazing how events like this can be so frustrating at the time and become so funny afterwords.

Driving around in DC can be a real nightmare, even after living there more than 20 years, every now and then I missed an exit or took the wrong turn, travelling to Virginia or Maryland or whichever was the wrong direction. Once I went all around the Beltway because the sign coming from Baltimore on I 95 was too confusing even for an old hand like me.

I am glad you managed to get to door back on track. Mamma mia, what a bummer! :-)

Ha! That is hilarious. On our family trip to DC, we went around and around and around, trying to get from the Arlington exit to the Iwo Jima Memorial. How hard can it be...but we never did get there. We finally gave up.

We traveled much of the world with young boys...because we had to, it wasn't much a vacation, lol...but it was entertaining. I miss it! Oh, and I voted!
hugs
Sandi