There are many stories I have not told, naturally, but there is one that keeps coming up. I keep debating about telling it . . . today I will, at least part of it.

I truly believe grief has to be one of the strangest of human emotions. It seems to me, that about the time one believes the “grief” and the loss are dealt with, the emotions come up and bite you in the back side. So far 2009 seems to be doing that a little more in our family. I don’t know why, it will be soon 3 years since the loss . . .

Remember a couple weeks ago when Ocho moved back in and I had a room to take apart? Well in re-organizing the contents of the room, I came across a folder. I did not recognize it – but as I started going through it a rush of emotions and tears took over. No one was home, so I could cry without making a scene or stirring things up for others.

A week before that, I received a call from my Kat, our niece, seeing if I was close by. My mother in law was having a very hard day. The sight of an old acquaintance brought the emotions to the surface.

My husband is the youngest of four children -and the only boy. There is Ann, the oldest, Betsy, 2nd; Cindy 3rd and then Will. Memorial Day weekend 2006, our family received news that seems still all too surreal. We were in town as well as our niece and Betsy and her husband. Everyone else had gone away for the weekend. At 5:30 a.m. on that Saturday, we received a call from Ann, who was at the beach. Em (her daughter and house sitter) had called when a detective had arrived at my MIL’s house during the night. Betsy had died, overnight. Actually she had been shot and killed. (Emotions are buggers, this is harder to write/type than to say). It was devastating and just did not fit into our world. No one’s world, no real people that is. In one evening the family lost a daughter, sister, friend, aunt. And they lost a son-in-law, brother-in-law, uncle, friend. What happened? Emotions, loss of control, bad decision? All of them combined. Life was crumbling around my brother in law, and in the heat of things, an action was taken and with that a life and his freedom.

What was in that folder? It was a folder of sentimental items from Betsy’s house. Probably a drawer with miscellaneous cards and photos and

School record book and what was once white gloves 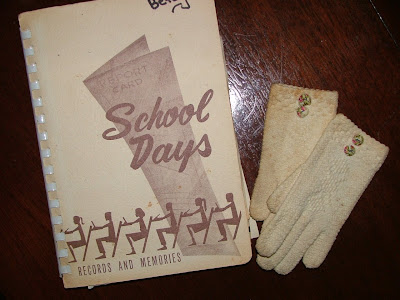 Lovely notes of affection from her husband. It is rather difficult to read cards that shared such love and to know how the story ended. 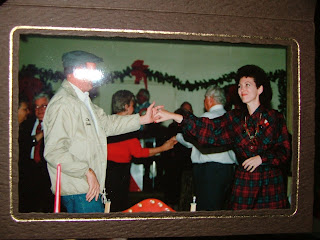 I had wondered, and still do, what to do with the items. A shadowbox for my MIL? Or would that be too, oh I don’t know . . .

So here we are today. I forgot what today was. It would have been Betsy’s 51st birthday. My MIL has asked everyone to go out to eat tonight because it would have been Betsy’s birthday. This is new. I asked hubby about it and he said he believes she is afraid of the forgetting. Even though so many memories are re-told and enjoyed at the various get togethers, time is still marching on. More time away from Betsy. 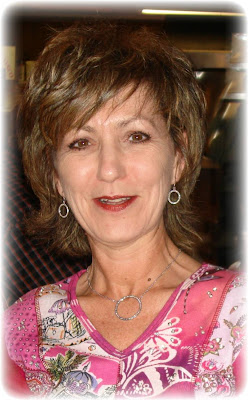 There is always a laugh at how Betsy never peeled a shrimp for herself or cut her steak, and now she is in Heaven with her dad, probably back to his cutting her steak and shelling her shrimp . . .

I think I will have shrimp tonight . . .
Pin It

Oh sweetie, some things will never make sense, and so often seem too hard to bear. You have a close, loving family to keep your sister-in-law's precious memory vibrant and alive. I am sure she will be with you in spirit as you celebrate her life.

You had me in tears Sweets...I think that a shadow box with these lovely things might be just the thing, since her mother is terrified of her being forgotten...I don't think it would be out of place. It would be like a memory box...
hugs
Sandi

BETSY,STOPPED BY FOR A VISIT.I THINK THIS IS A GREAT IDEA.I REALLY ENJOYED YOUR BLOG.HAVE A VERY BLESSED EVENING!

Oh...Imerie,I am so sorry for your family's loss. I believe that they will always be in your heart forever. I have no answers why something so tragic would happen. I just know that God is there to see you through it.

I ponder death as well, as a christian, I know that our loved ones are in a better place. I have just not figured out how to live without them.

Take care and eat cake in honor of Betsy!

no sense can ever be made of such tragedies. sharing does seem to help with our own grief and healing. i agree with Pam.. eat some cake and toast to Betsy!

Oh, lmerie, I'm so sorry that you and Will and all of his family went through this. That is such a very sad and tragic loss. I think it is wonderful that you will all be together to remember Betsy on her birthday.

So sorry for the heartache your family continues to experience.

Grief is a strange thing, and has a pace and rhythym all its own. I am glad you are accepting it and taking it as it goes, instead of trying to make grief fit into a box.

This must have been so difficult to write about.
I hope that it gives you just the slightest comfort sharing it with us.
Your family is strong and loving, keeping her memory alive, no matter how hard it is to go on thinking about her.
I hope that she has found peace and that your BIL has repented his sins.
BG

Oh your post just grabbed my heart and gave it a tug. What a sad story and be assured of my thoughts and prayers for your family. Yes, go out, and celebrate her life. I firmly believe it is the way to do it.

Oh wow. That is indeed a heavy memory. I hope you were able to peacefully honor Betsy while out at dinner. Thanks so much for sharing.

What a beautiful tribute. I'm so incredibly sorry that your family went through this, how tragic. I don't think the emotions ever go away, people learn to handle it, but it doesn't simply disappear. That might be a good thing, because it helps to remember. It's good to have the memories and to cherish them, even if it means to shed the tears. And the memory box ~ it's a beautiful thought.

That is such a gut-wrenching story, although it's not a story at all... how sad. I can't even begin to imagine. Just awful.

This is a lovely tribute to Betsy.

At least that's what I think.

This is a beautiful, well-written story, even if it is about something horrible and so sad with so many emotions that pop up out of nowhere. I understand the emotions. It happens to me because of my mother. Completely takes me off guard sometimes. But to have a life end so tragically must multiply it. I'm glad you can write about it.