Our camping trip was near a town that has a yearly tour of homes. I heard about it several years ago, knew it was in April, but really never gave it a thought until maybe May of each year. Always missing it . . . 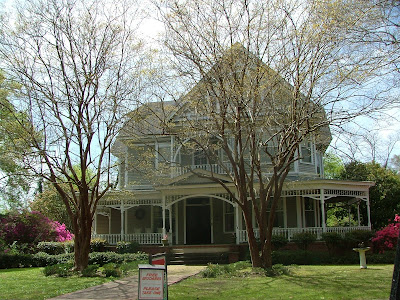 Well, this year we landed in the town during this event. We noticed the signs saying Eufaula Pilgrimage. That seemed like an interesting way to advertise a tour of homes. I assumed because of the folks walking the streets and all those that rountinely come to have a peek. 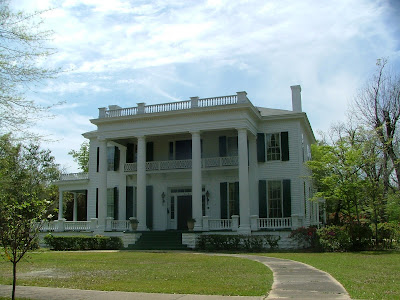 As we packed up and left the campground, we came through town to find some lunch on our way home. The streets were a buzz with locals and visitors. 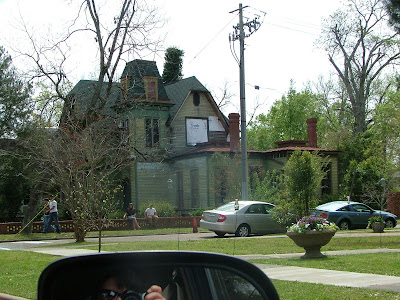 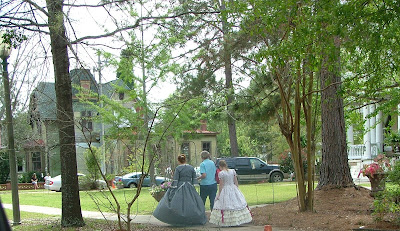 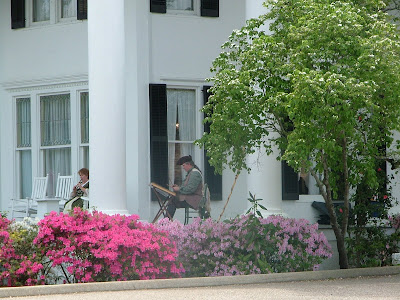 We stopped and ate lunch at a place called the Cajun Corner. It was not bad, but the prices and the portions were in stark contrast- we left hungry but with a chunk of our eating out money gone!

While waiting on our meal, The Man noticed the specials on the board. One item was Surf and Turf, one steak of your choice and one fish of your choice.

So after lunch we decided to walk around a bit. We came up on one house and decided to tour it You could pay per house or buy a ticket, we did not want to spend a whole day so, at the request of The Man we did tour this one . . . 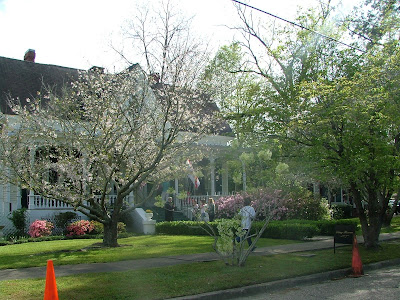 The Petry house. I am glad we did, it was quite interesting. The same family has lived in this house since the mid 1800's - of course not the original original family - no vampires or living forever, but their offspring. I believe they said 4 generations.

I did not snap any pictures in the house since that seems to be what always gets me in trouble - snapping pictures where one is not suppose too. The house was filled with original furnishings and the folks that live there have been busy rennovating for a couple years. We thought it was interesting that that was the style they lived with - very few modern items were seen, I did not even notice a TV.

At the beginning of the tour we found out why Eufaula calls it a Pilgrimage. Not because those that come to see the homes, but those that give the tours of the homes. Every year the descendents of these homes, children, cousins, aunts and so on, come back to provide the tour. In this house there were grandchildren, cousins, long time best friends that came from as far away as New Jersey to help with the tour -all dressed in 1800's attire for the event.

This particular house turned out to be unique to all the other homes on the tour - it is the only home in the town with the original detached kitchen - that is still workable (is that the word). They do not use it, a newer kitchen was added in the main house, and when the newer one was added, the door was just closed and not thought much of. Each year it is opened back up for the tour...

The backyard had a great little garden area with the fountain in the middle (this is from outside the kitchen door). They even had asparagus growing, inspiration to try it, now that I know it can be grown this far South. 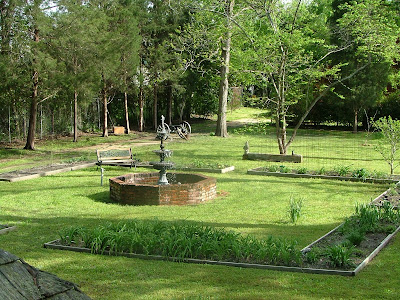 We finished the tour and headed back to the van to head home. 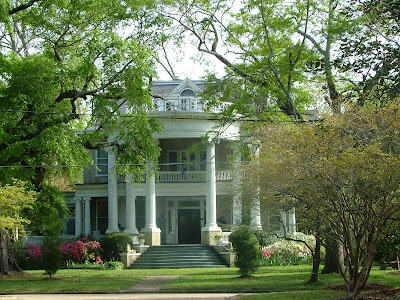 Later, Demolition D said the girl taking payment on the porch of the home we toured, had checked him out.

Demolition D: "pretty cool since my hair was a mess and I was wearing not such great clothes"
Me: "was she cute?"
Demolition D: "yep, and you know, I kinda liked the dress she was wearing. I think those dresses should be worn by more girls. Better than jeans and junky clothes. "

Things that make you go hmmmmmmmmm


That's my world . . . check out more sites from around the globe here
Pin It

I wish I were there...beautiful homes...wonderful piece of history! Lucky you! And your dialogue with "D"...just priceless!

Seems you had a great day out anong all those great houses.

That is my kind of town and pilgrimage for sure. Lovely lovely. It took me back to more Republic times and also slower times. Thanks so much. I adored every single picture and word. I am a very lot jealous though :)

This is a very interesting tour you did! I suppose you heard a lot of history too! Lovely houses! Thanks for your visit!

Wow - those homes are GORGEOUS! And it looks like such a beautiful day!

These homes look just like homes near where I live in East Texas. Tyler is the town and once a year they have an event called the Azalea trail. Beautiful homes and flowers.

I read your comment on "Saying Good Bye". Thanks! Of course you may have it. I got it from my daughter and she got it from a friend almost two years ago.

Hoop skirts and Azaleas just seem to make a fantastic show. I'm right fond of azaleas big as a bus.

This Is My Blog - fishing guy said...

Those were beautiful homes and gardens which you shared from your neat world.

Great tour of Eufaula, Alabama. Haven't been there but now I feel like I have thanks to you.

Thank you for your kind comments, my Southern lady. The Count has not passed through South Georgia in many long years, but I remember the many beautiful antebellum homes there. Your blog is a lovely thing. My best Count Sneaky

Those are such beautiful homes. That is so interesting to have a tour of homes each year. I love the conversation with The Man and DD's remarks about the girl in the dress!

Sounds like it was a really fun tour. The houses remind me very much of Newnan.

Once my first husband told me he had the best rabbi steak. I had no idea until I was shopping one day and saw "ribeye" on a steak package.

beautiful homes and look well-preserved. It's just so nice and kinda sentimental for me to know that the descendants of the owners of the home, try to maintain the houses and give tours. That's really a good heritage.

Touring historical homes - especially when family is still living there is a day well spent. I love that back yard! BTW You've made me hungry for some rabbi steak now. Is that kosher?

Lovely tour of homes. Thanks for visiting my blog. I really like yours too. That second house looked very familiar. It is just like the house we got married in without the upper floors. If you look at Noah's house in The Notebook, it is very similar. Very interesting.