The gentle breeze this spring has brought has been truly a blessing, because when it dies down, there is a buzz in the air. All the rain received earlier this year left a breeding ground for skeeters.

So last night our neighbors walked over to say hello and visit for a few minutes. As we stood outside talking, the buzzing began. And while talking, Sue's look quickly changed and the expression said big skeeter on your face and before I could react and get my own hand up to swat away the pest . . .

Sue smacked the skeeter - which was still on my face . . .

It was quite funny and so appropriate for this post. A memory . . .

My MIL has a home a block or so off the beach - Gulf Coast and it has been the spot for many a spring break trip.

In 2004 Ocho invited several friends to go with us, so we had a house full of boys. The evenings were filled with cards, spoons and Taboo. 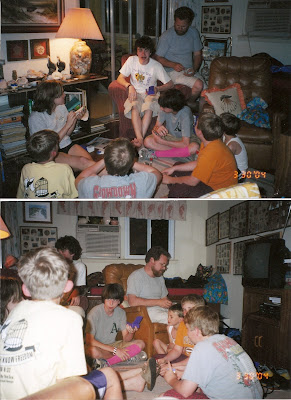 Traveler got the game started and the rounds were made. Two of the boys were twins. When it came around for their turn again, one of the twins drew the card.

The word created immediate frustration and a rush to send clues of the word. But no words came. His hands flapped in the air at his inability to find synonyms or any word at that.

When suddenly his hand flew out across his brothers face. His twin looked at him, his hand holding his red cheek and in a split second hollered 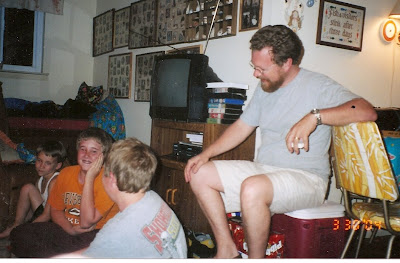 Everyone of us wide eyed, busted out laughing. I did catch a picture, and even though to anyone who was not there, this picture means nothing, but to those of us who were there, we know the reason for the hand on the cheek and that Will was laughing so hard, to the point of tears, and that one word "smack" made a picture worth a thousand words.

The twins are now in college, one stayed here to go to the local community college, the other is across the state. I asked the one who stayed, the one who smacked his brother, if he remembered that game, he had to think for a second and then a smile came across his face and he laughed again.

Play along with Memory Monday at Gayle's . . .
Pin It

What a wonderful family memory! Love it! Happy Monday!

What a great memory! That's so cool that you have photos to keep the memory fresh. (Very funny about your neighbor smacking the skeeter on your face, too!)

Such a wonderful and funny memory for you and your family. It will around for years to come.

What a funny and great memory!I would like to join monday memories!Maybe you can let me know what to do! Blessings, Faye

Those are some great memories:-)

Such great fun memories! I can't believe that you got it on film! You are quick draw w/ that camera! We also have huge skeeters out here.... nice of your smacking neighbor to help you. Too funny!
When I think of "smack" I think of smacking my lips with some good stuff... like Brown Sugar Scones... not THAT makes me smack!

I love family memories! Too funny!