Photo Phun Phriday - When the moon hits your eye

I just could not not add another valentine theme post - it is Phriday Photo Phun . . .

A couple years after being married, Will and I were going to have a Valentines evening alone. But as was our luck during that time, the alone part changed a few days before the 14th. First, Ocho's mom called and said she needed him to stay with us that night. That is fine. So my wheels start turning and my mind shaking out new plans. Then the boy's dad calls, he is not going to get them after all. Again, that is fine. Shift gears, rethink.

By golly george, I got it.

These boys need to be treated to a fun dinner, well, a date kind of dinner. We need to go ahead and expose them to the romantic side of life.

I asked off a little early from work and set off to create a "romantic" evening.

I told the boys they had to dress for dinner. You would have thought I said they had to dance or that I was going to pull all their teeth. Ocho and The Man quickly gave up their stance against the dressing up and joined in the fun. Demolition D went along, but not without the resentment under the surface.

I did compromise. I told them they did not have to wear shoes! They proceded to get dressed. I had the table set and the candles lit. And dinner cooking (steak and shrimp and chocolate mousse in daquiri glasses - I know what guys like!) 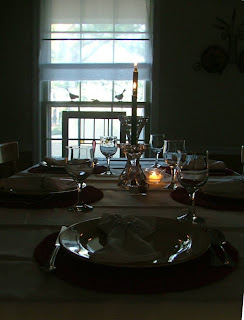 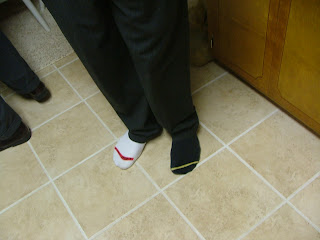 ...the mis-matched socks. It was great! 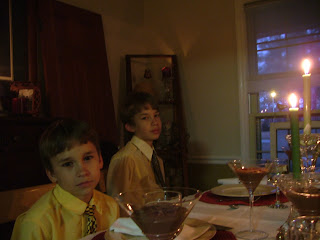 The Man tried to be serious for this picture, because as you see, his brother was still trying to be against the tie - at least for the picture. The other pics are blurry, but there was a lot of laughter, a lot of phun. And the boys had there first "romantic" dinner. 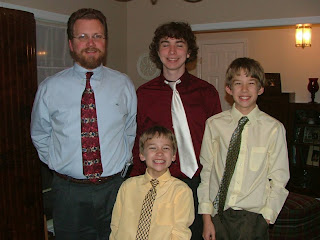 Carrie is the lovely host of Friday Foto Finish Fiesta. Go by and say hello and check out the list of those having fun on this friday.
Pin It

What a lovely thing to do for your family. They all look so handsome. Mismatched socks and all. That is a crack up. Really nice though. Makes me want to do something like that.

What a great family memory! Love the photos of those romantic guys!

I love it! What a special night mixed with a little glimpse into the future with "girls". You are a really cool mom.

I started a giveaway today...stop by if you have a minute. :)
Happy Friday!

That is just too sweet! I love the shoeless gesture. Lots of good memories are being made for your family. Enjoy and blessings.

Brilliant idea! We never got to celebrate Valentine's Dates b/c our youngest was born on Valentines Day... which was fine - so we always had birthday parties.
You handled the change in plans wonderfully! I'm impressed!
Happy Valentines Day to you!