Elementary school and valentines go hand in hand. I remember the excitement of picking out just the right set of themed valentine cards. The planning of who would get which message on the pretty much same cards in the cardboard box. Arriving at school and the surge of excitement from everyone to get to the dropping of Valentines in the bags that lined the chalkboard rail. Of course then there was the fun to see what cards you got, but more imporantly, the heart shaped candies that you knew would be in the bag. How many were actually glued to a card???

Ahhh, what a great time! I loved Valentines Day.

Fast forward to High School. Valentines Day? Well, we did not exchange valentines as before, unless you happened to have a boyfriend/girlfriend. If I happened to be dating someone, I was curious as to what might be shared. But who am I kidding, I only happened to have a "boyfriend" once on Valentines day in High School. He sent a single red rose and I smiled all day long. Not because he was the catch and I was in love (not really at all). It was the ROSE! And it was mine!!! As for the other Valentines through out high school, it was a day. It was fun to see who did receive a gift, who was an object of someone's affection. It was not viewed with anticipation or disappointment. Just a day.
Fast forward again . . .
1988. I am dating someone. Valentine's Day fell on a Saturday. I was getting ready to go to work when around 8:30 - 9:00, there is a knock at the door and then there is a dozen roses. Now, I am stepping out a little here, posting this picture and all, but I am going to do it. Remember, I was GETTING ready for work. The hair was not tamed yet . . . and it was the 80's . . .and for some reason I thought I needed a perm. ugh 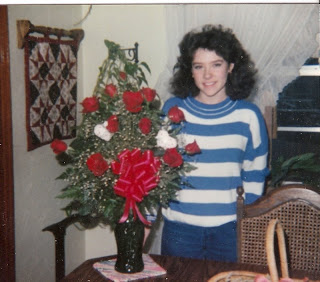 A dozen roses. I worked at the same place as the fella. I was flattered. I was teased at work. Innuendos of what is expected as the recipient of a dozen roses was crude.
But I recieved a dozen roses!! Valentines day is not so bad afterall.
The end of that year I married the sender of the roses.

And thus ended my short enjoyment of the Hallmark promoted holiday.

It is funny how we deal with disappointments or social pressures. Every year Valentines is pushed and encouraged and, well, is just everywhere! I grew to be very disappointed in the celebration. I chose cynicism to combat it. You know, it is the most commercialized holiday (errrr, except Christmas now), who needs a card company to tell us to show love (well, he actually did, but they were unsuccessfull). I did what I could to psych myself into not having expectations or being disappointed. I guess I should add here, roses were not necessary, just something sweet, simple, would have been cherished.
Fast forward again. A year after a final Valentines Day being married, and recieving some kind of flower and being told, as they were being handed to me," so and so said I better get you something for Valentines, here you go," I am single and dating someone. There is some anticipation. Short lived. I did recieve a gift. A coffee mug with carnations and a florist card with nothing but a huge D on the card. D for his first name. It was strange. It seemed awkward . A good gut warning . . .
One day, after ending that relationship, I was chatting with someone and she brought this fella's name up. She did not know we had dated. Laughing, she proceded with her story how every year on Valentine's Day, this socio path headed to the florist, across the street from the hospital (where we worked) and would order dozens of mugged flowers and sign enough cards and have them sent all over the hospital to women he was trying to entice. So glad that I escaped.
So Valentine's Day had become nothing more than an eye rolling occasion for me. More time has gone by and more changes in my life's journey. I was blessed with meeting Will, but Valentine's Day? Well let me tell you this . . .tomorrow
Pin It

I was a florist for twenty-five years and always considered Valentine's Day as torture your local florist day! Most florist are kinda crazy in a weird funny way. Can you imagine having to clean and cut the stems of 4,000 roses. You have to laugh or you will cry.

I discouraged young men from sending a dozen roses when they had just met or had barely dating a girl. Start with something simple and as your friendship/love grows you may give something more.

Roses are very special and should be saved for someone special.
I think you look so cute and young. I am glad that you found Will. That is creepy about that guy in the office sending out all those mugs of carns. I had to deal with stalkers sending unwanted flowers to ex-wives, which is not pretty.

Have a wonderful day!

The required expectation for Valentines day is what it's really all about and your telling of the life stages is perfect - and very much like mine, except I did't get flowers or d cups from sociopaths ...at least I don't think I did...

Our youngest daughter was born on valentine's day. It happened during a horrible time in our marriage and I always felt that God had given me a special Valentine of love just from him (because that was the ONLY thing I was getting that year!)
She was born 2 weeks early and has been a very special gift all her life.
But, celebrating birthdays always took over our valentine's celebration until she left for college. My husband has since made up for it wonderfully!

I have an award for your Blooming Blog! Stop by to pick it up.
Cynthia

That was a good post!
I remember the joy I felt from my first valentines cards! That romance didn't last long! But I loved the cards!

Thank you, most sincerely, for your warm-hearted comment about the bushfires.

I think Valentine's for preschoolers, up to about age 2 1/2, when they still are genuine.

Congrats on winning post of the day from David.