I find it interesting. I find it exasperating. The world of (some) young adults, and our world of parents, home owners, responsible contributing individuals...

We have many battles of expectations and requests and slow responses or sporadic conformity in our home.

We are a smoke free home. We do not smoke.  A couple of the offspring do.  Our rule is no smoking in the house and throw away your butts. There have been several instances of this being ignored in various forms.

When Traveler first moved back over a year ago, she tried to sneak past that rule, but the screen sorta fell off its perch as she opened it and the cigarette landed on the back step beneath the window. Caught! Addressed.
Moved on.

Last night Ocho's bedroom light was on and I thought he was at work, so I went to turn it off. Surprise! He had come home early and I had missed him coming in. I was so shocked, baffled, embarrassed to barge in that I did not mention how strong the cigarette smell was in his room. Very strong and it seemed that there was a haze.

I started to go back and ask, but hubs is out of state and I did not feel like a confrontation with stepson right before bed, so I sorta shrugged it off as he had been around a bunch of smokers and it was lingering in his clothes and on his body.

I stepped outside this morning to check out the ginger plant that is blooming, and as I walked back to the house, I glanced up and what should I spy? 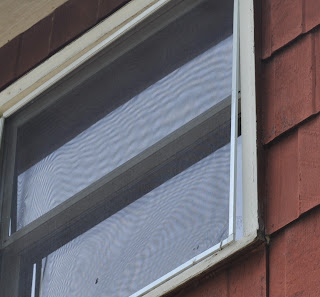 The screen on his window cocked out of place!  And what was below the window to the side of the step? A cigarette butt! 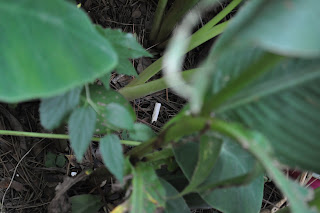 For awhile, hubs and my lunch routine included watching Judge Judy. On several occasions she would ask a parent if they knew how to tell if a teenager was lying. The answer? The lips were moving. Now Ocho is not a teenager anymore, but I do know that if I say something about it, it will be denied. And for that reason I can't decide if I regret not saying something or not. Probably would not matter, it would amount to just words. I wonder if I nailed the window shut it any sort of message would sink in ...

Why must there be so many ongoing challenges?

But my first ginger bloom of the season is in, can't wait for a few more and the wonderful smell that will waft through the yard! 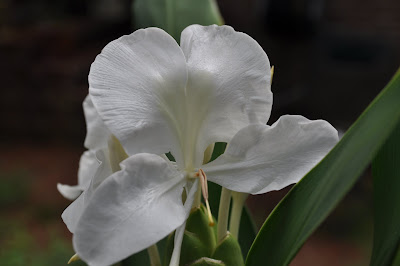 I know it's tough being a step-mom. I am one. Even though I married my husband after his kids were grown, there are still issues. Good luck.

That is a very tough thing. I don't have any advice. :(

It is so tough. We're not smokers. Our oldest doesn't. But our second one tried it. I just hounded him - relentlessly. He didn't smoke at home. However, I could smell it. I would just say, "You stink like cigarettes." He hates "stinking." If I found them, I threw them away. He finally quit. My husband was out of town a lot when this was going on. For lengthy periods of time. I couldn't just wait it out. Smokin' in the house though would have ended up with one less person in the house. That's how strongly I feel about it. I guess I was fortunate he didn't push that. Best of luck! (Try a spray bottle of lysol when he walks by - LOL)