Time to share our adventures has been at a minimum.

I have shared some about the business closing and now the end of the business is in sight and I am taking a few days off to recurperate and ready myself for the final - getting as much sold as possible and moving all that is left out and into storage.

I have not shared as much about home. We transitioned into having another adult child come to live with us. That makes four adults and two teenagers.

A recent commenter asked how we were doing with this change. We are still transitioning.

Traveler was due to leave for the Netherlands August 4th. Two jobs were being worked to save money. Tickets purchased. But no go. Her boyfriend broke up with her two weeks ago so plans have ended. She sorta knew it was coming, we have heard comments that began with "if we are still together" for months. Of course there is hurt and disappointment. She did say at one point, she was more upset about not going to school there than she is about "him." There has been good cries, pedicures, trips to see friends in Atlanta, new tattoos.

So new plans are being sorted thru and turned over - we hope. We are transitioning.

When Ocho moved in in February and Traveler in May, the agreement was they would place $300 a month into savings - sorta rent that goes towards their being able to move out on their own. A way to help them out - a way to be a host without being sucked dry and enabling them to step towards responsibility and self support.

Also, they would keep their rooms neat - not perfect, not spotless. Neat.

They would help out around the house, and we failed to say this, but thought their would be some family interaction.

No curfew - as long as we do not hear them during the night and they let us know ahead of time if they will not be coming home for the night.

Ok, here we are in July. This arrangement has been a little more challenging than we counted on.
The rooms, well let's just say gaaarosssssss. After Will asking for two weeks for them to do some cleaning, we took it upon ourselves to spend 4 hours one evening cleaning.

And then we charged them! Yes, a cleaning fee.

Ocho has kept his cleaner since, I guess he would rather we not go through every nook and cranny again. Traveler, that is still a little iffy. But they have been warned, next time we do not wash the clothes, the laundromat will, and they can go and pay to retrieve their clothes.

The curfew issue, oh well, the best laid plans is all I can say ...

Savings deposits? Well that was going fairly well until a car repair, a breakup and a couple tattoos.

Helping around the house. Ocho will if you can catch him at home and awake and micro-manage it. "You cooked (for himself), please clean all the food off the counters." "Remember, it has been your turn to clean the bathroom for two weeks now."

Traveler has been more interesting. We cracked up the first time Will asked her to help the boys clean up the kitchen after a big lunch. "But I am wearing a dress!" Take it off or put a T-shirt on over it. Two weeks later, please empty the dishwasher, "but I want to go see" so and so! "Then you might want to get busy. Only once or twice has there been no resistance.

I do all mine and Will's wash in one day to get it over with and to keep the washer open for the rest of the household. I had not washed clothes in about a week. One day about three weeks ago, getting ready to do our laundry, I noticed the clothes detergent was almost out. I decided to play a little game. I bought some of those really neat Purex 3 in 1 detergent sheets. I kept them in my room. The point of the game? To see when someone would say we were running out of detergent or buy some. Ocho and Travler had washed several times in that previous week. Nothing mentioned about the detergent.

As I said, that was three weeks ago. The Man and Demolition D have been gone, so they did not have any wash until this past week (I did supply them with the nifty sheets). D told me we were out of clothes detergent. I supplied. To this day, neither Ocho (who is 19 and works, does not go to school) nor Traveler (will be 22 in August and works) have said we are low on detergent. Nor have they said we are out of detergent. Nor have they purchased detergent. Yes they have washed clothes - but with no detergent.

But the latest is my favorite.

Last Christmas, Traveler stayed with her mom and came to our house to use the internet and eat. She said "mom doen't have any food in the house." At first I thought that strange, but as the holiday moved on, we kinda guessed why - she probably was tired of working 12 hour days to come home and be taken for granted and feed fully capable people who can afford cigaretts, parties, hobbies and such, but not even pick up a loaf of bread.

So now Traveler and Ocho are living with us. I am going out on a limb to display this (I know it could be more organized, but I don't have the time or inclination at this current point in time).

This is just behind one door. 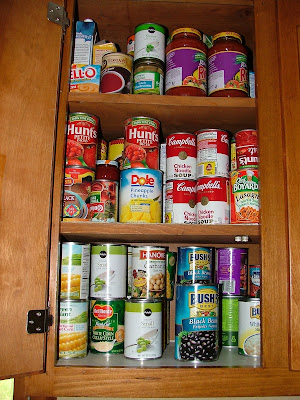 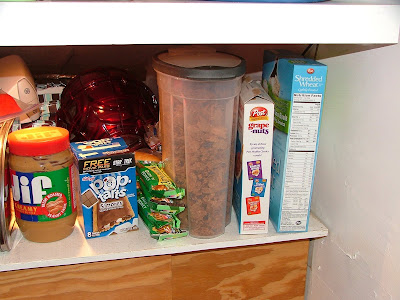 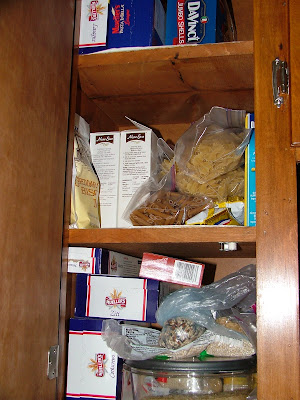 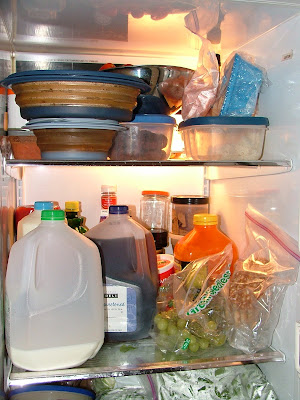 (there is gazpacho, tortillas, cheese, asparagus, okra and eggs too)

I show you this for a reason.

Last week, while Will and I were at our jobs, working away, Traveler came in the kitchen and said to Demolition D, "When I stayed at mom's I always came over here because there was food here, now that I am living here, there is no food."

I may be wrong, but I see food. And remember, Traveler is a vegetarian - I have items in the freezer, fridge, and cupboards to provide nutrition, minus the meat. Now granted, you have to take a can opener to get to the tomato soup. One might need to boil the pasta to go with the sauce. Maybe cook some rice and open the can of black beans. Might have to thaw the veggie dogs to actually eat. Might have to slice the tomatoes and cucumbers and mix up for a salad. But there is food.

So, as for the question, how are we doing? We are doing. At times we are enjoying. At times we are pulling our hair out. At times so glad to have a little more time with them. At other times completely dumbfounded by their perspective. But all in all, we are good. We are learning ~ we hope they are, but so far the actions do not show it.

When it is time for them to depart, we do know they had an opportunity to set themselves up to start out on the right foot. We know help and guidance have been offered.

In the end though, it will be up to them to make it work. And they will. Even if they trip some down that path, they will stand back up and move forward.

Oh my gosh, what adventures you have been on! The thing about the clothes detergent is so funny! I wonder when they'll mention to you that they're out. It sounds like you and your husband are doing a great job and hopefully the adult kids will learn sooner than later. I think in time they will appreciate your efforts.

Bless your heart!It will get better. You have a big heart! Hope you have a great day! Blessings, Faye

I hope you can get some much needed rest. Blessings to you and your family.

Have you wondered if they bought their own detergent and are not sharing it with you? LOL!

Or maybe they are using Dawn or something else as detergent.