It is only available for about a month each year, which is why I think I like it so much.

My trip to Publix was not finished though...

As I wandered through the fresh produce section, I spotted a new fruit for the store. A fruit I had never seen before As you see, it is very pretty. I asked the gentleman that works in that department what it tasted like.

He said, with a squintched up nose "nothing, nothing at all you probably won't like it"

Then he grabbed one and said "since you asked about it, though, let me cut one up"

He proceeded to the back, peeled it and sliced it and brought it back out. A couple of us took a piece. Then he forced the tray on me, telling me to take it. 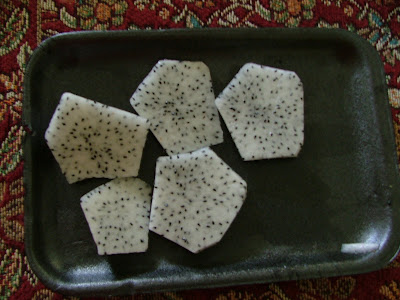 So now I have a tray with some Dragon Fruit slices on it. And you know what? They don't have much of a taste. A slight hint of sweet, a slight hint of tang. The black spects remind me of poppy seeds in looks. I would think this would be fun to add to a fruit salad to add more interest. A great conversation starter too!

Unless you just want to, I would skip the $3.99 piece of fruit and go for the peach cobbler ice cream.

Oooh, peach cobbler anything would be a winner here. And I like that you tried that new fruit even if the guy said it didn't taste like anything. That would have intrigued me even more.

I think I'll take peach cobbler, hold the ice cream, too cold on my teeth. However, this dragonfruit, now that is interesting.

Wow, that is a strange looking fruit! Sadly, we don't have Publix or Blue Bell Ice Cream around here. Did your buy the ice cream even without a coupon? I don't think it would be right to pass it up being that it's only available for such a short time! heehee!

Girl I'd skip it to!!
And I've never seen a Blue Bell coupon either...conspiracy!

me too...skip the fruit and go right to the ice cream...we love blue bell...never have seen a coupon~